After winning the dressage, József Dobrovitz gets the first place in marathon driving as well, in Mezőhegyes. In horse four-in-hand category the Hungarian World Champion reaches 100,72 points Carlo, Bandidos, Zizo and Conversano Congo. He is leading in overall too. The World Cup silver medallist Jerone Voutaz finishes second with 105,97, while Lajos Móró occupies the third position in marathon driving.
In horse pair Roland Szabó is the best driver in marathon with 90,13. He was driving Lipizzaner and a Nonius. Gergő Rákóczi gets the second place with 90,46 points, Károly Hódi on the third with 90,99 points. Recording the overall results Gergő Rákóczi from Romania is on the first place with 144.97. Roland Szabó is very close with 145.94.
In horse single the double victory (dressage and marathon) beloys to Katalin Nyúl. She is ont he first place in overall. Her horse is 18 years old KWPN Ziezo. The second fastest in marathon is Gábor Rondzik, and Katja Pflügl from Austria finished the third.
In pony pair Evelin Balla is the first, Zsófia Kovács has been disqualified. 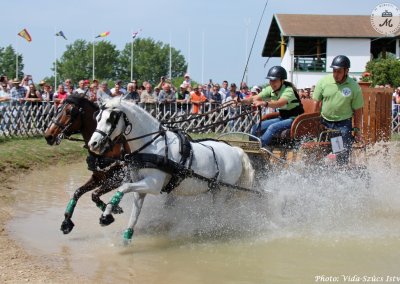